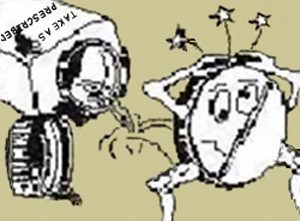 If it wasn’t so sad, dishonest, and bad for your health this could qualify for an April Fool. A report from the Sunday Post caught my attention. Their Raw Deal page helps to solve readers’ problems when all else has failed. The story from their reporter Paul Johnson tells of a couple that bought a three-piece suite from Marks & Spencer.

Deciding it was time for them to treat themselves to a new suite, the couple who live in Edinburgh spotted one that they really liked. A special deal knocked £700 off the original price of £2700. Happy with their purchase everything went fine for about five months then they noticed that colour was fading from around the cushion edges and the piping on the chairs because they used their chairs more often than their sofa, the sofa itself did not have the problems the chairs were having.

A year passed and the fading got so bad they got in touch with Marks & Spencer, who listened and arranged through the Furniture Industry Research Association for an assessor to call and inspect the suite…Here now is why this story is in my Related Health News section…

The assessor from the research association called, during his inspection, he noted that the fading was at its worst where the hands and heads of the couple came into contact with the leather. To their surprise, he asked if either of them were on medication for a heart complaint. The gentlemen himself said he was, although his medication was to control his high blood pressure.

Well, what was said next almost knocked my socks off? According to this assessor, the medication the gentleman was taking was coming through his pores and breaking down the top color on the leather’s surface.

Although after telling the couple this, it was never reported as such in his report to Marks & Spencer. Having received the report the company accepted the assessment that the suite was not faulty and informed the couple that there was nothing they could do.

It was suggested that if they were unhappy they could take their complaint to the Furniture Ombudsman. Unwilling to accept that a £2000 suite could go this way after only a year the couple paid the £50 fee required to involve the Ombudsman… Anyway, let’s cut to the chase. In May an assessor came to inspect the suite and in his report wrote:

In my professional opinion the area on both chair arms and headrests has been caused by the consumer who is taking medication for high blood pressure. In my experience, the medication perspires through pores causing a reaction which then breaks down the top finish and exposes the base colour.

After receiving a report from an assessor who had more than 20 years of experience, had inspected more than 30,000 complaints, and had also appeared in court as an expert witness I guess the Ombudsman had no other option and decided that the fault was not with the suite.

I guess as I said at the start, Raw Deal helps to solve reader’s problems when all else has failed. Contacting M&S Raw Deal asked them to reconsider and pointed out many others could be on this type of medication and should be advised not to buy the suites and true to their beliefs Raw Deal did not leave it there, they went on to contact the manufacturer of the medication the gentleman was on

The manufacturer involved checked back through records to 1963 and found, not surprisingly, that there were no reports of furniture fading being caused by medication seeping out of the pores in our skin. A spokeswoman pointed out, something visitors to my website already know, heart medication is passed out of the body in the individual’s urine and not through the pores in the skin.

Raw Deal got in touch with the Ombudsman who defended their expert’s claims and also said that the problems with heart medicines are known throughout the furniture industry. They were then referred to the British Leather Technology Center as being the source of the claims, but its spokesperson Tracey Faulkner told them:

To the best of our knowledge we’ve never given this advice. We have no further comment to make.

There is a happy ending to this story A spokeswoman from M&S got back in touch with Raw Deal telling them:

We’re sorry to hear about the problems encountered by the (Mr …) couple and want to thank the Sunday Post for drawing this to our attention. We will be replacing the chairs immediately. We feel there is some inaccuracy around the findings of the initial technician’s report and want to conduct our own tests and look into this matter further, but our priority is to the customer and ensuring this matter is resolved.

M&S also refunded the £50 that the couple paid out to the Ombudsman.

Methinks. I will have to ensure individuals are not on heart medication before the next handshake. After all, I do not want it seeping from their hand into mine… Only joking folks… do your assessors really believe heart medication seeps from the pores Mr. Furniture Industry Research Association. …I Don’t think so… Well, I ask you, what a load of old tosh (rubbish)… Nice one Raw Deal and nice write-up thanks to Paul Johnson for the Sunday Post.