When my marriage broke up, it wasn’t the only thing that went to pieces. I had been married for twenty-four years, known her for twenty-seven, and it was like looking in a mirror and seeing someone else… Everything was either different or gone… I mean everything was gone… even me. 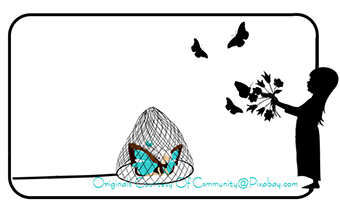 You eat if you can eat, you sleep if you can sleep. You take your medication, you do a jigsaw puzzle if you can concentrate long enough.

The pain does not go away, but it is not compounded by everyday stuff, the crap you can’t handle. That’s handled for you, or you just plain forget it. You’re left alone mostly. Some of the inmates resent this, and you can hear them asking where’s the help for me, me, me? But I was satisfied to be there out of the game for a while,.. safe…

The first few days were nothing, just getting used to being there. There wasn’t much to do, but then there wasn’t much I wanted to do… It was safe. After a while, I seemed to suddenly return from wherever it was I’d been, and I started to take notice.

I noticed a short solid-looking girl with reddish hair, and a trellis of scars on her forearms, I noticed a dark, thin woman whose fingers writhed like mating worms. I noticed a tall spiky-haired man with glasses, who seemed to laugh a lot, and went for cigarettes and papers, every morning.

Later I would know them as Joanne, Mary, and Paul. I noticed a whip-thin blonde, who walked silently, and moved as though she were scared her head would fall off. She was upright, and moved with a delicacy and a grace that may have been inborn, or may have been due to her medication.

She looked sad and beautiful to me. She did not do much or say much either. She had a look of Chris Everet, blue eyes, and dyed blonde hair. Her eyes were hard to look whose name was Chris. Lee was on “close”, accompanied, supervised, overseen, even when she was asleep. I’d learned that Lee was a self-harmer.

There’s a lot of tittle-tattle in those wards, not much else to do, I was told that Lee’s high neckline and long sleeves hid appalling scars. Maybe they did I never saw them. She spoke to me once, for about twenty minutes I can’t remember what we talked about, but I do remember one thing she said,… I was nice.

Every morning Lee would walk into the day room, carrying a cup of tea, fold herself into a bony zed in an armchair and begin to smoke. She smoked heavily nearly all of us did, even the staff. When I went in I was a non-smoker of four years standing. When I came out after a month I was on sixty a day.

The last time I saw Lee was at visiting time. I never had visitors. It’s too complicated to explain why I just didn’t. Or something, and sitting on the husband’s knee, is their kid, a pink fat little girl in her best party frock, come to see her Mam. Nice?… Family support?… Not really.

Hubby ranted, Lee’s Mam wheedled, auntie sat with a mouth puckered with disapproval. Dad just sat and looked perplexed, and so it went, on and on the ranting the wheedling, the demands, the questions. Why didn’t she pull herself together?… What did she have to be depressed about?… She had a good man… He was a good worker… Never wanted for nowt (anything). Everything to live for. Did she realize what the Lad (young man) was going through, working and bringing up the bairn? Aye, (now you know) and what was it doing to the poor bairn? (child) She’s only a kiddie. Lee sat behind a table, smoked, drank her tea, didn’t speak.

The little girl in her party dress, sensing the heat of the words started to whine. Lee seemed to get slower, more delicate, more graceful, as they tortured her. As they pulled off her butterfly wings, stuck pins in her eyes, and ripped off her blue denim legs, I watched. Her eyes seemed to be getting bigger, brighter, defined by her unshed tears.

Chris her nurse sitting by her elbow, reached out. She was too late. The table hit Mam across the shins, Lee’s cup hit hubby on the shoulder. Lee’s voice usually soft, was hard and rich, rasping from too many cigarettes, and too much rage… “Do you think I want this? Think I’m enjoying it? Do you think I want to be here? Do you? You stupid pack of b*stards! Do you?” Uproar, tears.

The original author of this story gave Medibolism express permission to publish their work on the website. It may not be reproduced in ANY form. All rights reserved by the Author.

Note
Where an alias has been used to sign several of the stories sufficient evidence has been presented to prove the truth of both ownership and story.

True Real Life Stories
As Time Goes By (real life story)
Scroll to top
We and our ad partners use cookies to serve advertisements and to ensure that we give you the best experience on our website. If you continue to use this site we will assume that you are happy with it.OkRead more